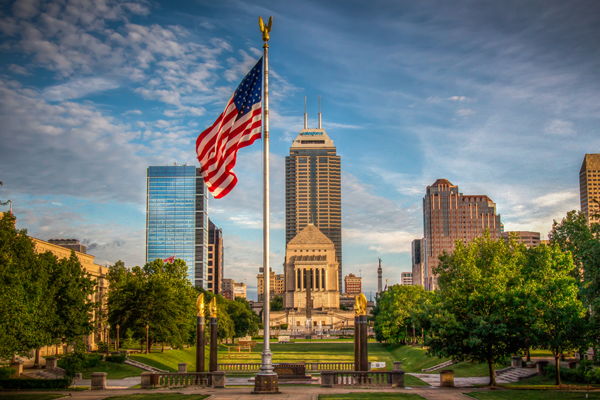 Indianapolis and its suburbs claimed seven of the state's 10 largest population increases in 2019.

In 2019, seven Indiana cities posted an annual population gain greater than 1,000 residents, according to U.S. Census Bureau estimates. Indianapolis tops the list by adding 5,424 people last year, which brings the nation’s 17th largest city to a total population of 876,384.

Four locales in neighboring Hamilton County also rank among these top gainers, led by Westfield’s addition of 2,137 residents in 2019 and followed by Carmel (1,925), Fishers (1,903) and Noblesville (1,365). In all, cities and towns in the Indianapolis metro area claimed seven of the state’s 10 largest increases last year.

The following interactive graphic provides details on population change since 2010 for each of Indiana’s 567 incorporated places (see Figure 1).

In terms of the pace of growth, Whitestown in Boone County, McCordsville in Hancock County and Westfield rank as Indiana's fastest-growing places among those with a population of at least 5,000 residents. These Indianapolis-area suburbs each grew by more than 5% in 2019.

For Whitestown, this marks the eighth time in the past nine years that it can claim the title of the state's fastest-growing place. Its population has nearly tripled over this span, from 3,141 in 2010 to 9,092 in 2019.

Other fast-growing communities include Lake County’s St. John (4.5% growth in 2019), West Lafayette (4.0%) and the Johnson County town of Bargersville (3.9%). In all, 19 of the state’s 20 fastest-growing cities and towns are found in either the Indianapolis metro area or the Indiana portion of the Chicago metro area (see Figure 3).

Indiana added a fifth member to its group of cities with a population of at least 100,000 residents in 2019. Carmel’s growth of more than 1,900 residents last year pushed its total population to 101,068, which ranks just behind South Bend (population 102,026). Given the recent growth trends for these two cities, Carmel will likely overtake South Bend in terms of total population in the next year.

With a population of 270,402, Fort Wayne remains Indiana’s second-largest city, and ranks 77th-largest nationwide. Evansville places third on the list of the state’s most populous cities, but with an estimated loss of 81 residents in 2019, it is Indiana’s largest city to show a population decline last year.

Twelve of Indiana's 20 largest cities posted a population gain in 2019. Among the cities that lost population, Lafayette had the largest decline, losing an estimated 512 residents. Other cities with relatively large drops include Hammond (decline of 355 residents), Gary (down 331) and Terre Haute (down 153).

In all, two-thirds of Indiana's 6.7 million residents in 2019 lived in incorporated places, while the remaining 2.2 million Hoosiers lived in unincorporated areas of the state. Indiana's cities and towns as a group accounted for 79% of the state's total population growth in 2019.

Tracking unemployment claims throughout the pandemic