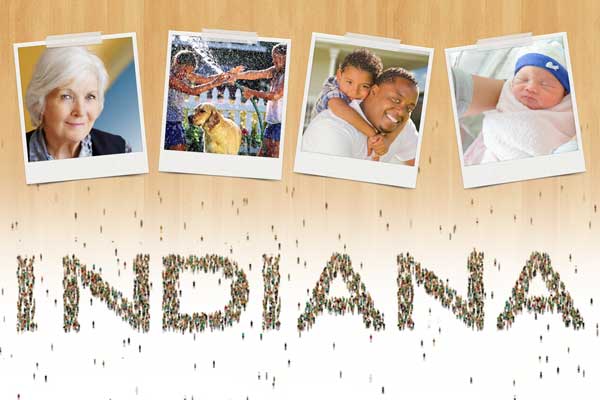 Indiana's population growth is expected to slow as a consequence of the state's aging population.

Indiana’s population will grow by roughly 660,000 residents between 2015 and 2050—a 10 percent increase over this 35-year stretch—according to new population projections released by the Indiana Business Research Center. Growth over this period will be heavily front-loaded, with 60 percent of these gains taking place by 2030. All told, the state’s population total will climb from an estimated 6.61 million residents in 2015 to 7.27 million in 2050.

These latest population projections—which are an update to our last round of projections published in 2012—fully incorporate the dramatic shifts that have occurred to Indiana’s population trends in the wake of the Great Recession.1 For instance, due to a sharp slowdown in migration and a drop in fertility rates since 2010, the projected total for Indiana’s population in 2020 is roughly 114,000 residents lower than it was in our last set of numbers. The state’s projected growth for the decade between 2010 and 2020 is less than half that seen during the 1990s and less than two-thirds as large as the growth recorded during the 2000s (see Figure 1).

Indiana is projected to see somewhat stronger gains between 2020 and 2030 as migration rates and fertility rates move back toward their longer-run averages (see Figure 2). The state will continue to grow in the next two decades, although at increasingly lower rates.

While total population growth has been surprisingly slow in recent years, other persistent demographic trends continue to reshape the state. Namely, Indiana will continue to grow older as the baby-boom generation ages, and just a handful of metropolitan areas will be responsible for most of the state’s population gains. This article summarizes the key findings from these population projections and highlights the key demographic trends that will transform the state in the coming decades.

All other major age groups will see their share of total population decline over this projection period. The 45-to-64 age group, for instance, will drop from 26 percent of the state’s population in 2015 to about 23 percent in 2035 as baby boomers age out of this class. This drop in relative terms translates into a decline of roughly 120,000 residents in the 45-to-64 age group over this span (see Figure 4).

While the decline for this age group over the next two decades is offset somewhat by an increase in the 25-to-44 age group of 67,000 residents, Indiana’s traditional working-age population is set to decline some over the next 20 years. Between 2035 and 2050, however, the number of Hoosiers between the ages of 25 and 64 should climb again, increasing by 2 percent over this stretch.

The number of births in Indiana should climb over the next 10 years but then hold relatively flat for the next two decades before beginning to rise again. Meanwhile, the number of deaths in the state will increase from about 63,300 per year between 2015 and 2020 to 85,500 per year between 2045 and 2050. Comparing these same periods, the natural increase of Indiana’s population is projected to fall from approximately 22,200 residents per year to 5,400 annually (see Figure 5).

When thinking beyond the year 2050, it is encouraging to note that the projected slide in Indiana’s natural increase is expected to end during the 2040-to-2045 period, with a slight uptick in this measure expected over the next five-year span. So natural increase will continue to be a source of population growth in Indiana, and will likely grow steadily, though slowly, in the second half of this century.

Indiana will continue to grow over the next 35 years, but the state will likely see wide differences between a relatively small number of mostly metro-area communities that will fuel this growth and a large number of mid-sized and rural communities that are projected to see population declines. Between the years 2000 and 2010, 63 of Indiana’s 92 counties saw an increase in population. The number of counties to add residents between 2010 and 2015 fell to 35, according to U.S. Census Bureau estimates. These projections indicate that only 33 counties will see a population increase between 2015 and 2050 (see Figure 6).

Hamilton County will not be the only community in the Indy metro expected to see rapid growth. In fact, the five fastest-growing counties over this projection period will be suburban communities in this region. Boone, Hendricks, Johnson and Hancock counties will each see their populations grow by at least 33 percent by 2050. Outside of Central Indiana, the other communities that are projected to grow by at least 20 percent by 2050 are Tippecanoe, Daviess, Monroe, Clark, Elkhart and Switzerland counties.

While the state will have a number of fast-growing communities over the next few decades, most Indiana counties will likely see a decline in population during this projection period. Losses will be especially common among Indiana’s mid-sized and rural communities. As Figure 7 highlights, the 44 Indiana counties that are part of a metropolitan statistical area will combine for a 15 percent increase in population between 2015 and 2050. Meanwhile, the state’s mid-sized communities—or micropolitan areas (meaning counties with a city or town that has a population between 10,000 and 50,000 residents)—will have a 6 percent drop in population, and Indiana’s rural counties will combine for a 9 percent decline by 2050. All told, 59 of Indiana’s 92 counties are expected to see population losses over the next 35 years.

The reason for these widespread declines is twofold. First, in recent years, most Indiana counties have had a net out-migration of residents. Between 2000 and 2010, for instance, the IBRC estimates that 62 counties in the state had more people move away from the county than move in. Yet, over the same period, only 29 counties lost population, meaning that 33 counties had enough natural increase over the decade to overcome the net outflow of residents and post population gains.

These projections suggest that most counties will continue to have a net out-migration, but as the population ages, fewer and fewer counties will have enough of a natural increase to make up the difference. In fact, a growing number of counties will show a natural decrease of their population in the coming decades (i.e., more deaths than births). Data from the Indiana State Department of Health indicate that 27 counties in Indiana had a natural decrease in 2015. These projections show that as many as 71 counties could have a natural decrease by 2050. As a result, many of the state’s mid-sized and rural communities will continue to age rapidly, while only a few of Indiana’s metro areas will draw in young adults and families (see Figure 8).

The easiest way to compare aging in counties or states is to look at the median age. In 2015, Indiana’s median age of 37.6 was slightly younger than the U.S. mark of 37.8. The median age in Indiana is projected to creep up to 39.9 in 2040, and then hold at that level for the remainder of the projection period. While Indiana is a relatively young state, 59 of its counties had a median age of 40 or higher in 2015. The number of counties with a median age of at least 40 will jump to 75 in 2050 (see Figure 9).

Figure 9: Projected median age of the population by county, 2050

The IBRC’s projections are purely demographic, meaning that they rely exclusively on recent birth/death data and migration estimates. Therefore, these figures are a reflection of what Indiana and its communities will look like if past trends continue. No assumptions have been made about future economic conditions or land use decisions.

Also, some population dynamics can be difficult to project. Migration, in particular, is prone to sudden swings. Therefore, long-range projections can be subject to significant error and it is often useful to pay greater attention to trends during the first 15 to 20 years of the projections period.

A closer look at Hoosiers with no high school diploma