A drive into Indiana’s countryside quickly reveals fields of row crops, pastures filled with livestock, and farms with barns and equipment scattered about. Along the journey, one would likely pass several forests of tall, towering trees. All of this and more encompasses Indiana’s agriculture industry. Visually, it’s easy to see and appreciate the state’s rich agricultural heritage, but understanding the industry of agriculture and its economic impact is more challenging.

The agriculture industry involves more than production agriculture, such as raising livestock or growing crops. It also includes manufacturing, wholesale, storage, support services, tourism and retail operations. Agriculture is entwined in every aspect of our lives through the basic essentials of food, clothing and shelter. This article highlights the findings of the Indiana Business Research Center’s (IBRC) recent economic impact study on Indiana’s agriculture industry1 to inform readers about the current state of the state’s agriculture economy.

Why an Economic Impact Study?

It is estimated that Indiana’s agriculture industry contributed $37.9 billion in economic output and supported nearly 190,000 Hoosier jobs in 2011 (see Figure 1). 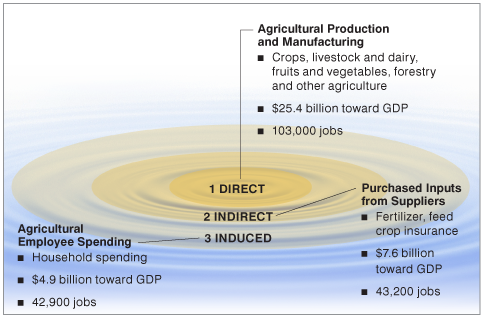 Another measure of overall economic impact is the use of a multiplier. A multiplier is defined to be a measure of the magnitude of the economic response in a particular geographic region associated with a change in the direct effects. For the agricultural production and manufacturing industry, the multiplier was 1.49, meaning that every dollar of output supported $0.49 in additional economic activity within the state (see Table 1). In terms of employment, the multiplier (ratio of total employment effects to direct employment) was 1.84. This means that for every 100 jobs directly related to Indiana agriculture and manufacturing industries, another 84 jobs were supported in the state.

Table 1: The Economic Contributions of Agriculture and Forestry to Indiana’s Economy, 2011

Source: IBRC, using data from the USDA and the IMPLAN economic modeling software

While the economic output numbers are impressive, keep in mind that these numbers do not account for the expenditures associated with creating these outputs. Value added (otherwise known as GDP) is the difference between an industry’s total output and the cost of its production inputs. It consists of four components: employee compensation, proprietor income, other property tax and indirect business tax.

Indiana’s agriculture and forestry-related establishments combined to generate an estimated $5.7 billion in direct value added (see Table 1). This activity sparked an additional $7.2 billion in indirect and induced effects throughout the state to bring the industry’s total value added impact to nearly $13 billion. Compared to the state’s total value added (GDP) of $267 billion, the combined effects of agriculture and forestry accounted for nearly 5 percent of Indiana’s GDP in 2011.

Which Agriculture Industries Have the Most Impact?

The logical next question is, which agriculture industries contributed most to these economic impact numbers? Table 2 outlines the top five industries in both employment and contribution to the state’s GDP (value-added).3 As anticipated, grain farming, oilseed farming, and hogs and other animal production garnered the top three places. This is due, in part, to these industries having the top three production values in 2011. Rounding out the top five were wet corn milling and animal processing (except poultry).

Together, the top five industries were responsible for supporting approximately 67 percent of additional employment and 63 percent of the total value added to the state’s GDP. Wet corn milling had the largest multiplier of all the agriculture and forestry industries in both employment and value added at 10.35 and 4.0, respectively. Recognizing that wet corn milling includes the production of corn starch, high fructose corn syrup, animal feed and ethanol—most of which are ingredients in other manufactured items—it makes sense that it has such an impressive ripple effect.

How Do These Results Compare to Past Statistics?

A common question received after the report was released was, “how do these results compare to past reports—is Indiana agriculture growing?” Unfortunately, there is not another agriculture economic impact study that allows us to directly compare past numbers with these data. And if one looks at the data that are available, methodology differences alter which industries are considered agriculture and forestry—which can greatly skew the numbers.

However, with this in mind, the Indiana State Department of Agriculture had several talking points they utilized during Governor Daniel’s first administration that can be used as a reference point. It was stated that approximately $25 billion was added to Indiana’s economy from farm, food and forestry products—this report shows $37.9 billion, a 52 percent difference.

A 2005 report by BioCrossroads estimated that agriculture had a $10 billion multiplier effect on local economies (determined by multiplying the multiplier with the 2003 wages by agriculture industry). It implied that for every dollar in direct wages and income from farm, food and forestry workers, more than 2.5 times that amount flowed back into the local economy.4 The current report did not attach wages to the multiplier effects, so a comparison cannot be made.

Based on the few comparison points, one would argue that the state’s agriculture and forestry industry has increased its economic footprint since the mid-2000s. A cynic may retort that the increase is due to high commodity prices—hence the economic impact numbers are inflated. While it is true that the prices received for commodity goods have dramatically increased in the past decade and that farmers have enjoyed particularly good prices in the past two years alone, the expenditures associated with producing the commodities to garner those prices have increased dramatically as well.5

Despite the increase in commodity prices, production of raw agricultural products has not increased unilaterally across all categories. Production quantities actually decreased in the past five years (2006-2011) for several commodities, such as soybeans and cattle and calves (16.2 percent and 22.6 percent, respectively). Soybean production declined due to fewer acres planted (however, corn production dropped slightly as well 1.4 percent) and drops in yield due to persistent plant and pest diseases. Cattle production numbers have declined due to soft demand, higher feed prices and drops in number of cattle raised.

As Hoosiers continue on their countryside journey, hopefully they will also realize the great economic contribution that Indiana agriculture brings to the state. It is understandable why Indiana’s agricultural industries have been encouraged to expand in the past decade—with $37.9 billion in total economic output, leading to approximately $13 billion in value added to the state’s GDP while supporting approximately 190,000 jobs. The state’s agriculture and forestry industry future is very bright, and it continues to have strong support from the new governor. Opportunities have been identified on how to leverage the state’s agriculture expertise for additional future economic growth.6

In the meantime, agriculture production will maintain its ebb and flow despite potential setbacks due to weather conditions or forecasted commodity price drops. Agricultural technology will continue to change the productivity levels of raw commodity products such as increased crop yields and better livestock genetics. Our forests will continue to be re-populated to maintain sustainable logging practices. And Hoosiers who farm or don’t farm will remain in awe of the acres upon acres of our agricultural bounty.