Data is the backbone of business. Companies need data about the location of their business, the destination of their products or services, about their labor supply and availability of capital. They seek data on their competition and their consumers. Businesses are data hungry and have learned more efficient ways to locate and mine data.

Data is also the backbone of the nonprofit world, education and government. Many of us seek it through Google searches. And millions seek it from the U.S. Census Bureau, the federal agency tasked with collecting information about the residents of the United States, state by state and community by community. While this agency is perhaps best known for the questionnaire that hits our mailboxes every 10 years in April, it is already a major hit on the Internet because millions go there to grab statistics about industries or communities.

December 2010 was a major milestone in the world of community statistics with the release of the five-year estimates from the American Community Survey (ACS). These estimates, based on a sample collected between 2005 and 2009, provide even the smallest town in America with estimates of their population by age, by race or ethnic origin. It estimates the number of households, educational attainment and shows the differences in earnings between men and women.

Important Facts about These Five-Year Estimates:

Figure 1 gives a good idea of which counties have all three types of estimates vs. just the five-year estimates. 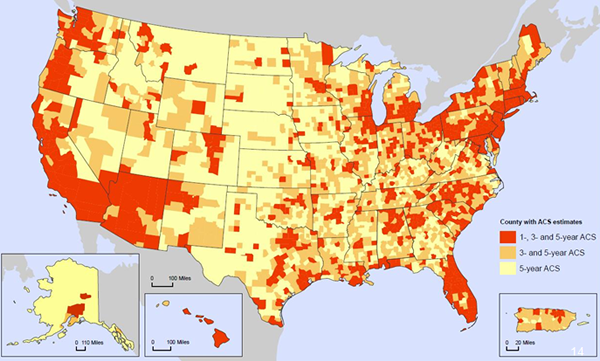 The ACS is a new data beast, so we should all proceed carefully as we begin to use this new information. Here is a short list of its pros and cons as delineated by the Census Bureau itself:

All the data for the nation will be available via the Census Bureau’s American FactFinder website. But STATS Indiana will also provide our users easy access to the most useful indicators as well as other helpful tools.