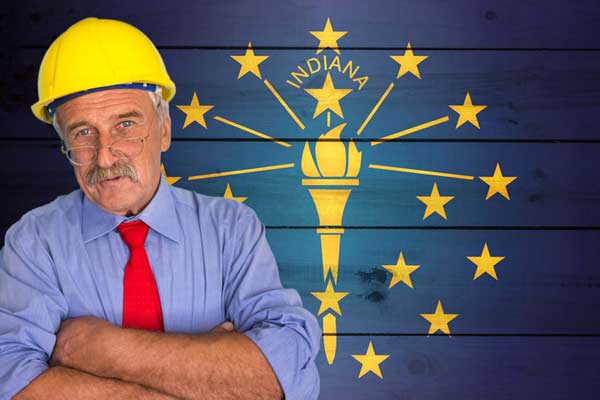 After decades of dynamic growth in the size of its labor force, Indiana is set to enter an era marked by little or no change in the number of workers in the state. Between 1950 and 2000, Indiana’s labor force doubled from 1.57 million to 3.12 million as the large baby-boom generation came of age and women entered the workforce in ever-increasing numbers. Looking ahead, however, the youngest of the boomers will reach traditional retirement age by 2030 and female labor force participation rates have almost certainly peaked. As a result, after adding an average of more than 280,000 workers per decade between 1950 and 2010, the latest projections from the Indiana Business Research Center (IBRC) suggest that Indiana’s labor force will grow by only 34,000 in total between 2020 and 2050 (see Figure 1).

Note: Beginning in 1960, the Census Bureau defined the eligible labor force as the population ages 16 and older. It was 14 and older prior to 1960.
Source: U.S. Census Bureau and Indiana Business Research Center

According to the projections, Indiana’s labor force will have a relatively healthy gain of 120,000 workers between 2010 and 2020. The state’s labor force will likely decline in the next decade, however, as more and more boomers retire. Indiana’s workforce will begin to expand again—albeit slowly—during the 2030s and 2040s (see Figure 2).

This article will summarize the key findings from the IBRC’s labor force projections, with a particular focus on the factors that influence labor force changes and the shifts that we can expect to see in Indiana’s counties and metro areas.

Change in the size of Indiana’s labor force is influenced by two factors: demographics and shifts in labor force participation. The key demographic trend of the last 75 years, of course, was the emergence of the baby-boom generation. This outsized cohort—born between 1946 and 1964—fueled the dramatic growth in the labor force both nationally and in Indiana during the 1960s and 1970s. But with this group now on the cusp of retirement, boomers will play an equally central role in dampening labor force growth over the next 10 to 15 years as more and more of this group retire.

As Figure 3 highlights, the labor force today features both the baby-boom generation and the similarly large millennial generation, with the comparatively small Generation X sandwiched between. So as all boomers reach traditional retirement age by 2030, the smaller Gen X cohort will take their place in the older-age workforce (i.e., ages 50 to 65), while the also small “post-millennial” group will occupy the ranks of the younger labor force.

While most of these demographic forces were set in motion long ago, a recent shift in fertility trends also promises to impact the size of the labor force in the next few decades. Since the Great Recession hit around 2008, fertility rates in the U.S.—Indiana included—have been declining. In fact, the U.S. had a record-low fertility rate in 2016.1 Here in Indiana, the IBRC estimates that if the age-specific fertility rates observed in the years just before the Great Recession had held constant, the state would have approximately 70,000 more births between 2010 and 2020 than it likely will end up having. This trend—which has yet to show any signs of changing—has been sustained long enough that it will certainly impact the size of the labor force in the decades ahead.

Migration also plays a role in labor force changes. As Figure 4 shows, net migration acted as a drag on population and labor force growth in the 1960s, ‘70s and ‘80s; but that trend reversed in a big way over the next two decades. Much of this improved net migration between 1990 and 2010 was driven by Hispanic residents moving to the state, as the Hispanic population accounted for 77 percent of all net migration to Indiana over this 20-year period, according to data developed by the Applied Population Laboratory at the University of Wisconsin.

As with fertility rates, however, the Great Recession triggered a period of lower levels of migration to the state that is still in effect today. Indiana had an average annual net in-migration of 17,500 residents during the 1990s, and this measure stood at 9,200 residents per year in the 2000s. Between 2010 and 2017, however, the net inflow to the state has dropped to 1,900 residents per year, which is another factor working against stronger labor force growth. The IBRC’s population projections for Indiana that serve as a basis for these labor force numbers were made with the assumption that migration to the state would rebound modestly in the decades ahead, but that migration would not reach the levels seen between 1990 and 2010.2

Along with demographic shifts, labor force participation is the other variable that drives change in the number of workers in the state. As Figure 5 illustrates, Indiana saw a dramatic rise in the number of women entering the labor force over the second half of the last century. Indiana’s female labor force participation rate (LFPR)—the share of population ages 16 or older that are in the labor force—increased from 27.6 percent in 1950 to 60.0 percent in 2000. Given that the population was also climbing over this period, the increase in female LFPR translates to an increase in female workers from 410,700 to 1.45 million. This momentous shift helped to boost Indiana’s total LFPR 13 percentage points to 66.6 percent in 2000, even as male LFPR was declining from 80.0 percent to 73.7 percent over the same period.

Total and female LFPRs appear to have peaked somewhere around the year 2000. Between 2000 and 2016, Indiana’s female LFPR ticked down by 0.9 percentage points, while the mark for males slipped by more than 5 points. In all, Indiana’s total LFPR dropped 2.9 percentage points over this period to 63.7 percent in 2016, which is slightly above the national mark of 63.1 percent.

However, most age-specific LFPRs are projected to either increase or decline only slightly. The LFPR for Hoosiers ages 65 or older climbed 2.3 percentage points between 2000 and 2015 and is expected to rise another 1.3 points by 2025 (see Figure 6). Meanwhile, the IBRC projects that the LFPR for the 45-to-64 age group will also edge up slightly over this period, while the 25-to-44 bracket will essentially hold steady. After declining sharply through the 2000s, labor force participation among the state’s youngest workers has rebounded to nearly 62 percent in 2015, though these projections assume that the LFPR for this group will drop a bit over the next 10 years.

Figure 7 illustrates how these shifting LFPRs, combined with expected population dynamics, translate into labor force participation rate projections for specific age groups. The development that jumps out most is that the size of the 45-to-64 bracket will decline as the boomers age out of this group, while the labor force ages 65 or older will climb through 2030.

The overall slowdown in labor force growth is not unique to Indiana. The U.S. Bureau of Labor Statistics (BLS) expects a similar trend in labor force change nationally (see Figure 8). U.S. labor force growth has outpaced Indiana’s for some time and will likely do so in the future. However, the BLS projects that the nation’s average annual growth rate will slow to 0.4 percent per year during the 2020s, and is expected to stay at that level over the next two decades.

There are wide differences in projected labor force change among Indiana’s regions. Seven of the state’s 15 metro areas are expected to exceed Indiana’s rate of labor force growth between 2015 and 2025 (see Table 1). Leading the way is the 11-county Indianapolis-Carmel-Anderson metro, whose labor force is projected to grow by 0.6 percent per year over this period. Other metros with relatively high projected growth rates through 2025 include Lafayette (0.6 percent per year), Bloomington (0.4 percent), Columbus (0.4 percent) and Elkhart-Goshen (0.4 percent). Each of these metros will have a lower rate of change between 2025 and 2035.

As a group, the 47 rural and mid-sized Indiana counties that are not in a metro area are also projected to lose labor force in the years ahead. Non-metro counties with the steepest expected declines between 2015 and 2025 include Blackford (-1.6 percent per year), Tipton (-1.1 percent), Rush (-1.1 percent), Fountain (-1.1 percent) and Randolph (-1.1 percent) counties (see Figure 9).

A few non-metro communities will add labor force in the near term, however. LaGrange (0.5 percent annually), Daviess (0.5 percent), Switzerland (0.3 percent) and Decatur (0.04 percent) counties are expected to see some labor force growth by 2025.

Suburban communities in the Indianapolis area dominate the list of counties with the fastest projected rates of labor force growth over the next 10 years, led by Hamilton (2.0 percent per year) and Boone (1.8 percent) counties. Other counties expected to have strong growth in the near term include Tippecanoe (0.8 percent), Monroe (0.6 percent) and Clark (0.5 percent) counties.

Since around the year 2000, just a handful of metro areas have accounted for nearly all population and labor force growth in Indiana. These data suggest that unless migration patterns shift significantly, this trend will continue. In fact, only 22 of the state’s 92 counties are expected to see their labor force hold steady or grow between 2015 and 2025.

The fact is, unlike during the second half of the last century, there are no labor force-boosting developments on the horizon that are similar in magnitude to either the boomer generation or increased female participation, and certainly nothing akin to both of these simultaneously. So how will a slowly growing labor force handle the needs associated with a rising dependency ratio while also maintaining, or hopefully improving, living standards?

One way to meet this challenge would be with strong productivity gains.3 However, U.S. productivity growth has been relatively slow in recent years according to the BLS, but perhaps tightening labor markets will spur increased productivity gains. Other avenues that could help address this concern would be increased migration, as well as education programs and wage increases that lead to higher labor force participation rates. Some combination of these factors will need to occur for Indiana, and the nation as a whole, to improve living standards in the years ahead.

The primary data inputs for the labor force projections presented in this article are the IBRC’s population projections, which were released in March 2018, and age-specific LFPRs for the state and each county from the Census Bureau’s 2015 and 2016 American Community Surveys. Changes in the future path of age-specific LFPRs are based on projected shifts at the national level from the BLS’s long-range labor force projections.

As projections, these numbers simply reflect the labor force changes we can expect if past trends continue into the future. There are many factors, however, that could alter these expected trends. The variable that is most sensitive to change is the LFPR. The LFPR in the younger age group, for instance, is still relatively low and is projected to remain that way. However, a strong economy with a tight labor market could draw more young workers into the labor force.

Migration is another variable that is important to future labor force trends but is susceptible to large swings and is difficult to project. Strong economic growth and a tight labor market could spur a greater-than-expected net in-migration to Indiana in the coming decades. Or, in the other direction, Indiana could experience periods of net out-migration like one it saw during the 1970s and 1980s.

To access the entire labor force projection data set or to read a detailed methodology, visit STATS Indiana at http://www.stats.indiana.edu/topic/laus.asp.