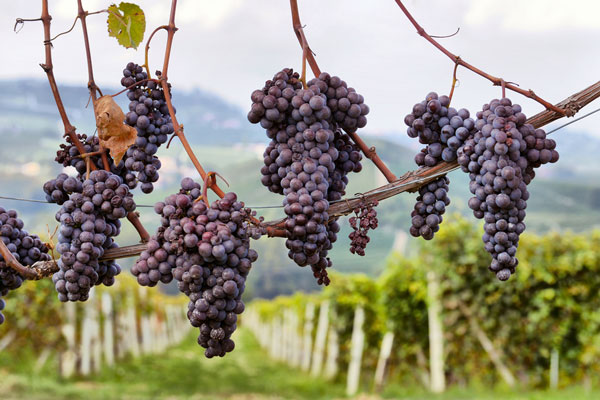 Agglomeration helps us understand why there are so many wine producers in California, financial services firms in New York and auto manufacturers in Detroit.

Economic developers may or may not be familiar with the term “agglomeration economies” but, more than likely, intuitively understand it. In the economic development sense, it refers to the economic benefits that come when firms locate near each other. It’s the reason why there are so many tech companies in the San Francisco Bay Area, wine producers in California, financial services firms in New York and auto manufacturers in Detroit. Agglomeration is closely related to, but distinct from, industry clusters—which are familiar to many due in part to Michael Porter and others’ work on the U.S. Cluster Mapping Project. In a nutshell, the forces of agglomeration contribute to the formation of industry clusters, but one should refrain from using the terms interchangeably.

Edward L. Glaeser, in the introduction of his seminal volume on agglomeration economies, insists that the benefits ultimately come from transport cost savings.1 But the question for economic developers is why firms continue to agglomerate when movement of goods, labor and knowledge across space has never been easier or cheaper to do.

This article is a practical guide for economic developers to make sense of agglomeration and its benefits to a region’s firms, residents and workers. It summarizes research on how agglomeration provides these benefits and why firms and industries continue to agglomerate today by providing real-life examples of different regional experiences across the United States. It also presents some ways economic developers and public officials can harness this research to develop practical solutions to make their regions more competitive to firms and workers.

Here are some key takeaways:

Why agglomerate? The complementary forces of localization and urbanization

Consider two different industries that cluster in certain regions, but for different reasons: wine production and software. Since wine is made from grapes and grapes are perishable, winemakers must locate in regions with climates that support the growing of grapes, such as California, Eastern Washington and the Finger Lakes region of New York.

Employment in the software industry is also concentrated in relatively few regions, like Silicon Valley, Seattle, Los Angeles and Boston. But, unlike wineries, the inputs in software development aren’t perishable; indeed, anyone with the necessary skills and a computer can develop software, regardless of where they live. So why is employment in this industry so heavily concentrated in just a few regions? The concepts of localization and urbanization may provide an answer.

Localization. Agglomeration is driven both by the concentration of an industry (localization) and the size of the city itself (urbanization). Localization is about firms choosing to cluster in particular locations because of regional advantages, such as access to inputs, like grapes for wine production or cheap, fertile land for agriculture. New firms in the same industry follow established firms and continue to cluster in these regions, so localization economies generate clusters of firms producing the same product. As more and more firms agglomerate in industry clusters, the regional advantages to locating in these industry clusters increase as firms share knowledge and labor pools in addition to inputs.

Urbanization. Urbanization has to do with agglomeration across industry boundaries; the idea is that the presence of firms in one industry attracts firms in other industries. Urbanization economies lead to the development of large, diverse cities with plentiful jobs and amenities that attract a skilled labor force. The abundance of labor is beneficial to firms because an increase in a region’s workforce increases the density of worker skills, so firms can more easily find workers that align with their skill requirements. Firms also benefit from firms in other industries whose services they desire. An example of urbanization economies is when firms, especially corporate headquarters, cluster in cities to share firms that provide business services like marketing, accounting and legal services.

To see the forces of urbanization and localization at work, consider the three maps in Figure 1, which were produced using the IBRC’s “QCEW-Complete”2 estimates of employment in wineries, software publishing and offices of certified public accountants (CPAs).

The shading indicates employment and population density, where high employment is defined as 100 people employed in that industry or greater, and high population density is defined as greater than 1,000 people per square mile. In the maps for CPAs and software, one can see that employment is concentrated in areas with higher population density. For offices of CPAs and software publishing, 117 and 99 counties, respectively, have high employment and high density. Very few counties have only high density and not high employment in these industries: 25 for software publishing and only seven for CPAs. This makes the case that urbanization is a strong force for these industries, especially CPAs. Intuitively, this makes sense: CPAs provide a specialized service—accounting—and virtually every firm in existence requires these services, including software firms and other firms drawn to agglomerate because of urbanization.

Contrast this with the wineries map. With the exception of the Bay Area, employment in wineries shows little correlation with population density. Indeed, the correlation coefficient between employment share in wineries and population density by county is virtually zero, compared to 0.18 and 0.09 for CPAs and software publishing, respectively. Only 15 counties have high employment in wineries and high population density, suggesting that the forces of urbanization aren’t as important as localization for wine production. This gets at an important point, vocalized by Arthur O’Sullivan in his textbook Urban Economics: “In the last several decades, there has been a fundamental shift in the specialization of cities. Large cities have become increasingly specialized in managerial functions, while smaller cities have become more specialized in production.”3

At risk of oversimplification, production industries seem to be more influenced by localization, while managerial and “knowledge-based” industries—like tech, business services, media, etc.—seem to be more influenced by urbanization. That being said, this isn’t a hard-and-fast rule, and aspects of both localization and urbanization drive firms to agglomerate.

What’s in it for regions and workers?

It’s clear that individual firms benefit from agglomeration, but what about the region and its workers? This is a critical question for economic developers as they work to diversify their region’s industries, attract high-paying jobs and improve economic conditions for their communities. The regional benefits of agglomeration are plentiful and often align with firm-level benefits; those discussed here include labor pooling, higher wages and social and civic opportunities.

Labor pooling. Both firms and regions benefit from labor market pooling. A cluster of firms in the same or similar industries facilitates the movement of workers between firms, resulting in more job opportunities. When workers have more job opportunities in a region, they may stay in that region for a longer time and decide to put down roots by purchasing a home and/or starting a family. Not only does this generate more tax revenue for the region, but it also enhances the connections people have to a place and its social capital—or the collective value of social networks and shared norms and values in a region.

Higher wages. Wages are higher in urban areas where firms tend to agglomerate because workers in cities tend to be more productive and cities provide more learning opportunities.4 This learning could be formal, like a coding bootcamp or professional certificate, or informal, such as from a mentor or on-the-job training. So when a worker migrates from a rural area to an urban area with strong industry clusters, their wages will rise over time as they learn and their productivity rises.5 Moreover, if a worker decides to leave the region for a less-urbanized one, their wages won’t drop back to the wage they earned before coming to the city because of the accrued learning and experience.

Social and civic opportunities. Agglomeration of firms in the same and related industries in cities can enable formation of strong social networks and foster community civic engagement. As mentioned before, agglomeration leads to greater employment opportunities for workers in a region. This makes it easy for workers to move from one firm to the next without having to leave the region, which facilitates greater attachment to the region and, as a result, a higher propensity to participate in civic activity. Established residents may be more likely to vote in municipal elections, serve on public boards or commissions, volunteer, donate to local charities, send their children to community schools, and participate in a host of other facets of civic life. Such activity fosters the growth of social networks that can be leveraged for, among other things, leisure opportunities, romantic partners or career advancement. These networks can be considered social capital assets, and although scholars haven’t reached a consensus regarding the link between social capital and economic development, the bulk of research in this domain asserts that some types of social capital have positive effects on economic development outcomes.6

Agglomeration for good: If you build it, they will come

How can economic developers leverage what they know about agglomeration to improve their communities? Two complementary approaches are to grow already-existing clusters and foster a sense of place for the region.

Grow already-existing clusters. A good first step is knowing which industry clusters are already in your region. The aforementioned U.S. Cluster Mapping Project can be helpful in this regard, especially the cluster portfolio dashboard. Figure 2 shows industry specialization in the Cleveland, Ohio, economic area. On the X-axis is employment growth from 1998 to 2016 and on the Y-axis is the employment share in the industry, while each industry’s bubble size corresponds to total employment and the color indicates whether jobs were lost or gained. The industries in the upper-right quadrant are those with the greatest specialization. Here, food processing and manufacturing sticks out because of its relatively high employment share, 1% growth in employment share from 1998 to 2016 and the fact that it’s gained jobs over this period. 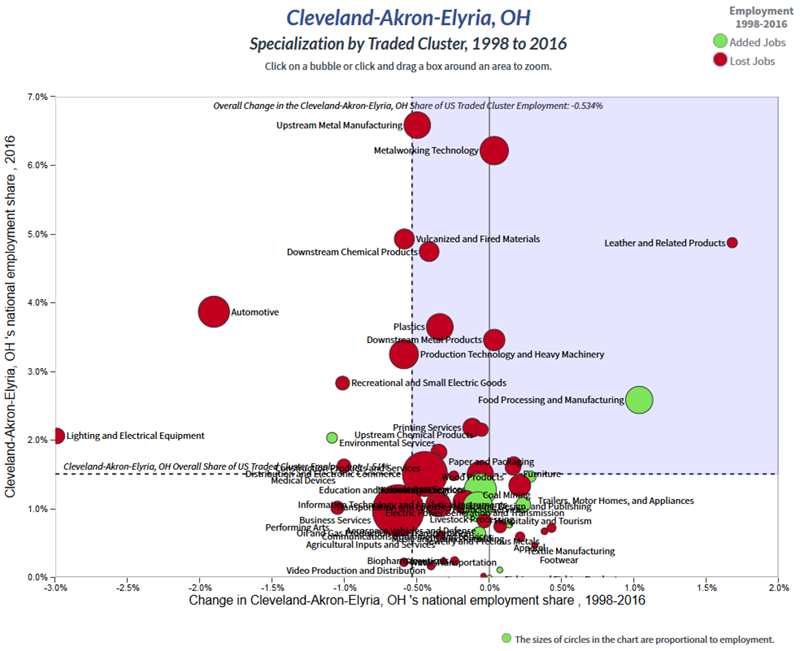 Clicking on any bubble on the interactive chart at the Cluster Mapping site will take you to the Region-Cluster Dashboard, which gives more information about the cluster in the Cleveland region, including subclusters and related clusters. Knowing which clusters are dominant, and which clusters are related to these dominant clusters, can help economic developers decide how best to target resources to grow these industries. For instance, since the food processing and manufacturing cluster is related to the distribution and e-commerce and biopharma clusters, these clusters may be primed to grow and public officials may be wise to direct resources to facilitate this.

A sense of place. It’s clear that firms agglomerate for reasons other than proximity to inputs and related firms. In the 21st century especially, decisions about firm location often come down to the nature of the city itself—urbanization economies, in the agglomeration parlance. Cities attract workers with particular skills that, in turn, attract firms. So perhaps the greatest factor driving agglomeration is the notion of a sense of place: When people enjoy living somewhere and feel a connection to the region, firms will follow. This represents somewhat of a paradigm shift from the old days of “company towns,” when workers tended to follow firms to find jobs, not the other way around.

The research on agglomeration suggests economic developers should focus less on “creating jobs” and more on attracting and retaining residents through policies and initiatives that enhance the region’s sense of place, commonly known as placemaking. These policies and initiatives should be people-centric, not business-centric, in recognition that growing and maintaining a diverse, skilled workforce should take a front seat over attracting businesses through financial incentives like tax abatements that often aren’t worth it. Such initiatives must be grounded in the region’s cultural and social resources; they should emphasize what makes the region unique. At its core, placemaking should be about investment in making the region sustainable, equitable and prosperous for its residents. When place itself is the priority, rather than just jobs and economic growth, prosperity and growth are likely to follow. Simply put, if you build it, they—firms, residents, jobs—will come.