Hoosiers Commuting Into Illinois for Work: Timing Ripe to Reverse the Flow?

More than 50,000 residents of Indiana commute to Illinois for work, based on data produced by the Indiana Department of Revenue and analyzed, mapped and available from the Indiana Business Research Center at Indiana University on an annual basis. That number is larger than the total population in some of our counties.  Considering the recent ballooning of Illinois income and business taxes, the time seems ripe for Indiana to consider bringing those Illinois businesses closer to their workforce in Indiana.

The majority of Hoosiers who commute to Illinois for work are located in the northwest part of Indiana, but a fair number also live in Vigo, Vermillion, Vanderburgh and Posey counties in the western and southern parts of our state (see Table 1).

A far lower number of Illinois residents commute into northwest Indiana for work. This imbalance could be changed if businesses in Illinois that already employ a large number of Hoosiers re-located their business to Indiana or expanded into a new location in Indiana.

Conversely, a large number of Illinois residents travel to Indiana for work in Vanderburgh, Gibson (think Toyota) and Vigo counties.

Figure 1 shows the heavy commuting flows between Northwest Indiana and Illinois. According to older but still relevant Census 2000 data, the majority of Lake County, Indiana residents going to Illinois for work were headed for jobs in Cook County, Illinois. 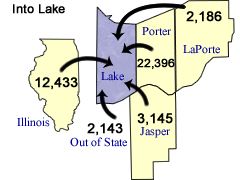 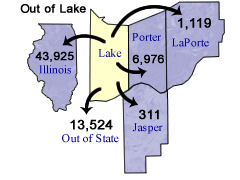 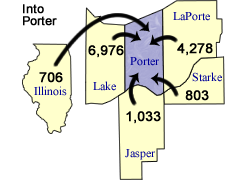 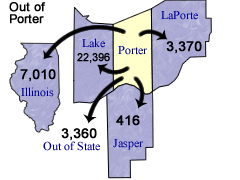 While commuting to and from Illinois and southwest Indiana is not as large as in the Chicago region, the commuting patterns are still significant and, in some ways, more evenly balanced (see Figure 2). Gibson County is a big draw for Illinois residents, most likely because of the Toyota plant and its suppliers in the region. Vanderburgh (Evansville) receives more workers from both Illinois and Kentucky than leave the county to work in those states. 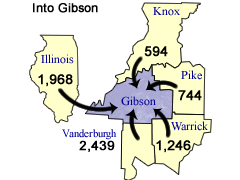 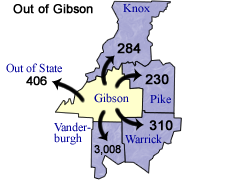 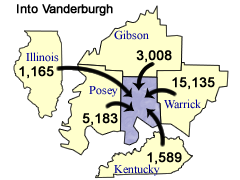 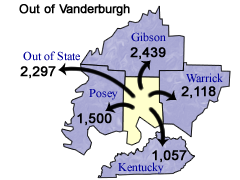 The music industry, in the form of Columbia and now Sony, has been a big draw to residents of Illinois.  However, if we consider Vermillion County, to the north of Terre Haute, we see more Hoosiers crossing the border for work than Illinoisans. The total opposite is true of Vigo County, which continues to draw nearly four times the workers from Illinois than leave Indiana for jobs in that state (see Figure 3). 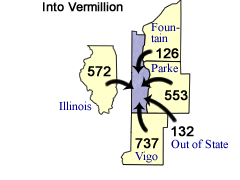 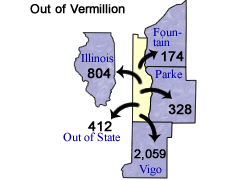 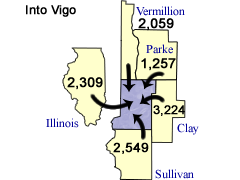 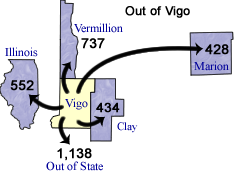