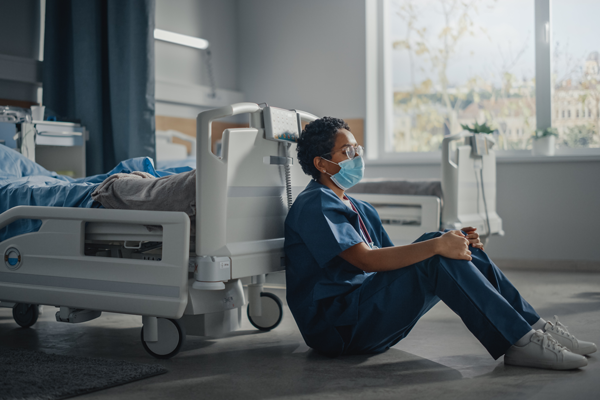 The number of COVID-19 deaths during the pandemic took a heavy toll on Indiana's total population growth.

Indiana added 20,341 residents in 2021 to reach a total population of nearly 6.81 million, according to the latest population estimates from the U.S. Census Bureau. This is Indiana's smallest annual increase since 2015 and is well below the state’s average annual gain of nearly 30,200 residents over the previous decade.

The primary cause of this slower growth was a sharp increase in the number of deaths in 2021 as the COVID-19 pandemic took a heavy toll (see Figure 1). At the same time, fertility rates in Indiana continued to decline, resulting in only 77,600 births last year—the state's lowest annual tally on record dating back to the late 1960s.

Due to these developments, the so-called natural increase of Indiana's population—or the number of births minus the number of deaths—was a scant 690 residents in 2021. To put this number in perspective, Indiana had an average natural increase of roughly 21,150 residents per year between 2010 and 2019. Meanwhile, half of all states had a natural decrease in 2021, meaning deaths outnumbered births (see Figure 2).

With the state’s natural increase essentially flat, Indiana’s population gains were fueled almost entirely by a strong net in-migration of more than 19,000 residents in 2021.

Indiana's fastest-growing counties continue to be suburban communities in the Indianapolis metro area. Boone County led the way with a 2.6% population gain in 2021, followed by Hamilton (2.2%), Hendricks (2.2%) and Hancock (2.0%) counties.

In terms of the largest numeric gains, Hamilton County once again set the standard in 2021 by adding 7,782 residents—a level of growth more than twice as large as runner-up Hendricks County's increase of 3,827 residents. Other top gainers included Allen (2,716), Johnson (2,118) and Boone (1,883) counties.

Marion County had the state’s largest population decline last year with a loss of nearly 5,670 residents—a 0.6% slide. This drop stands in stark contrast to the trend over the previous decade when Marion County grew by an average of roughly 7,380 residents per year between 2010 and 2020. An estimated net out-migration of nearly 9,230 residents was the primary driver of this decline in the state’s most populous county.

St. Joseph County had the state’s second-largest decline at 337 residents, while Jackson County was close behind with a loss of 306 residents. As for the pace of decline, Pulaski County had the state's sharpest slide last year at 1.2%, followed by Jay (-1.0%), Knox (-0.8%) and Pike (-0.7%) counties.

Drivers of change in Indiana counties

Due largely to the COVID-19 pandemic, 69 Indiana counties—75% of all counties in the state—registered a natural decrease of the population in 2021 (see Figure 4). In terms of absolute numbers, Lake County fared worst in this measure, with 710 more deaths than births last year. Delaware, Madison, Porter and LaPorte counties also had a natural decrease of 300 residents or greater in 2021.

Of the 69 counties with a natural decrease, 41 had a net in-migration that was strong enough to overcome these losses and result in an overall population gain.

Meanwhile, 68 counties posted a net in-migration of residents in 2021, with the faster-growing Indy-area suburban counties claiming the top five spots in this measure.

Select a county in Figure 5 to explore its components of change details.

Population growth in Indiana continues to be driven by a handful of metropolitan areas. Foremost among these is the 11-county Indianapolis-Carmel-Anderson metro area, which added roughly 13,100 residents last year, accounting for 64% of Indiana’s net growth in 2021. The Indy metro area is home to nearly 2.13 million people, which represents 31% of the state’s population and ranks as the nation’s 33rd-largest metro area (out of 384 metros).

As Figure 6 highlights, the Fort Wayne area led all Indiana metros with a growth rate of 0.7% to reach a total population of more than 423,000 residents. Other Indiana metro areas to show relatively strong growth include Lafayette-West Lafayette (0.5%), Columbus (0.4%) and Bloomington (0.3%).

The Gary Division of the Chicago metro area (Lake, Porter, Jasper and Newton counties) grew by 0.2% last year and is the state’s second-largest area with 719,700 residents.

Explore the latest population estimates for Indiana and its communities—including the components of population change—via STATS Indiana’s population topic page at https://www.stats.indiana.edu/topic/population.asp.